Skip to content
Home/DIY/Word of the Week: Blooms
Previous Next

Word of the Week: Blooms

It’s still gray here. We’ve had rain and snow in the past week. And it’s March, so we can look forward to more of the same, then mud. Yuck. 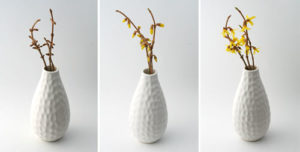 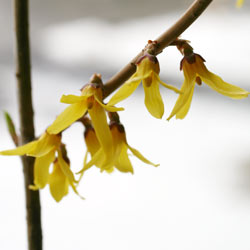 In all, it took about a week for them to blossom. When I read about this the recommendation was to cut the branches on a day that was above freezing, put them in warm water, then re-cut them while holding them under the water. Then they recommended putting them in floral preservative. I took the quick and easy (lazy?) route by just cutting them and putting them in water. (I did cut them on a warm-ish day.) Probably it would work better to cut and re-cut them as recommended, but it DOES work to just cut and put in a vase.

Make sure you choose branches that have lots of buds on them. I cut several long branches and a few short ones for tiny arrangements. The burst of color is such a boost on a rainy day like today. If you’re still a month away from a green and blooming yard, remember that you’re only a week away from enjoying an indoor spring! Let me know if you try this and what types of plants you were able to force! Have fun!