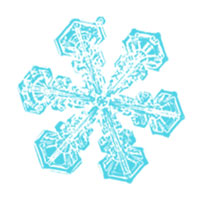 Did you ever hold out your mitten to catch a snowflake? And then marvel at how intricate and beautiful it was? If you’re like me, it was probably when you were a kid. To grown-ups, snow is that annoying stuff that’s hard to drive in and a pain to clear from the sidewalks. That sense of wonder about snow (and maybe about other things, too) has been replaced with the practical and mundane. “Oh, great, it’s snowing again. Yuck.”

Last week I got a preview of this book called Bentley’s Snowflakes. It’s a part of Dover’s Clip Art series, available as CD-ROM and Book. The book description says, “For almost a half century, American photographer W. A. Bentley captured on film thousands of snowflakes in his Jericho, Vermont, workshop. Intended as research and teaching aids for scientists and art instructors, his painstakingly prepared images were remarkable revelations of nature’s diversity in uniformity: no two snowflakes are exactly alike, but all are based on a common hexagon.”

This book contains 576 images. Some of them look just like storybook snowflakes. Other snowflakes look like flowers. Some appear to be miniature tinker toy constructions: tiny, elaborate frozen structures.

Others resemble alien spacecraft right out of Spielberg’s imagination. Still others look like sparkling jewels. Each one is different. Marvelously, wonderfully different.

Looking at these photos I remembered learning as a kid that every snowflake that ever falls is different from every other. I remember how that thought allowed me a glimpse at the impossible enormity of infinity. I remember how much time I spent just thinking about how things worked and why the world was the way it was, and I realize that filling every minute with activity (the way most of us do) leaves me little time for wonder.

As I wrap up my last work week of 2010, I am looking forward to some quiet (and loud!) time with family, hopefully some snow (our first significant snow is falling as I write this), and a few days to enjoy the season. Maybe this year I’ll be able to sled and make snowmen without worrying about wet clothes and the snow we’ll all track inside? Maybe I’ll even make some hot cocoa for myself, too? Maybe catching a few snowflakes will help me recapture the wonder? What do you think?