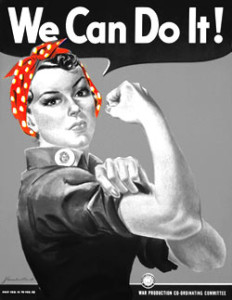 I didn’t realize until right now that we’re nearing the end of Women’s Self Empowerment Week (January 5-11). If I’d realized sooner, would I have “celebrated” the week differently? Probably not. Several months ago I started incorporating terror into my everyday life. Okay, maybe not terror, but I took Eleanor Roosevelt’s challenge to “Do one thing every day that scares you.” And, okay, maybe this hasn’t happened every day, but many days. More days. Working through scary things makes me feel empowered.

I think I have always been more afraid of NOT doing things: the fear of becoming complacent and just “settling.” What I’m reading online about self empowerment week makes me wonder if other women are doing this. “What’s all the fuss about? Why a special week for ’empowerment’–I’m empowered!” And sure, it is sort of like waiting for Valentine’s Day to tell someone you love them, or appreciating your secretary one day of the year. Ridiculous to think of empowerment one week of the year, and yet those who think that women are already empowered all of those other weeks aren’t thinking of the women who have no access to health care or birth control, adequate child care, or equal pay. Are we ready to get complacent when these basic needs aren’t met?

I feel extremely fortunate that I’m not someone else’s possession, that I can work hard at a business I’m allowed to have, and I can keep the money I make. That, too, sounds ridiculous, but these were not “givens” at all times in our society. In my mother’s generation there were no girls’ sports teams in her school. If you wanted to participate, you were a cheerleader. A friend of hers wanted to become a scientist, but understood that women could only be nurses or teachers. So she went to nursing school. People told their children, “You can be whatever you want to be,” but that only really applied to the boys. My aunts both got masters degrees even though my grandfather believed that advanced education was wasted on women. (Just before his death he allowed that it was okay to educate women because they could, in turn, “educate their children.”) This man was a doctor. He was not alone in holding this opinion.

Earlier this week I noticed that the Lilly Ledbetter Fair Pay Act is back in the House, along with the Paycheck Fairness Act. Both passed the House last year but didn’t make it through the Senate. Both would ensure equal pay for women doing the same jobs as men. (Last year President Bush threatened to veto the legislation.) I can’t understand how a woman making 78¢ to a man’s dollar can consider herself empowered, in ANY week. According to The Institute of Women’s Policy Research, this amounts to “$400,000 to $2 million in lost wages over a lifetime.” Over 40% of women are the sole income providers for their families, with single female heads of household twice as likely to live in poverty as single male heads. Why is this still acceptable? Part of my “celebration” this week included messages to Congresspeople encouraging support for this legislation.

To me, any “celebration” should include appreciation and gratitude, and Women’s Self Empowerment Week is no exception. Appreciate what we have and how far we’ve come, and be grateful that so many worked hard to make it possible. But understand that you can’t take something for granted until you have it. The empowerment that comes with being equal members of society is still not ours, and there are many things left to do to make this happen. Write to your Congresspeople and Senators. Speak out about issues that affect you and your families. Do something scary every single day, not just this week. It’s not time to get complacent yet.

Did you celebrate Women’s Self Empowerment Week? What makes you feel empowered? Please share your comments below!