We Will Not Forget 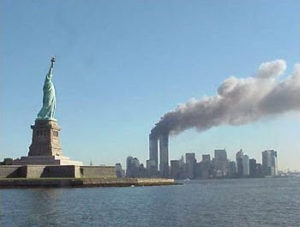 It was a Tuesday morning, and I was running errands with my kids. We were in the bank just before 9 am, and the tellers were all abuzz over the news. Some little plane had flown into the World Trade Center, my teller told me. They’d heard it on the radio. I dropped my errands and went straight home, turning on the TV in time to see Flight 175 hit the South Tower.

Of course, it wasn’t a small plane, and it wasn’t an accident as they had first assumed. I spent the day watching the coverage, knowing the world was changing. I had visited the World Trade Center with my cousin Kim during a high school trip. We had gone up to the observation deck in the South Tower, on the 107th floor. I remembered what it felt like to lean in toward the glass and look down, that awful feeling I got in the bottom of my stomach. How much sicker I felt watching the coverage, hearing that people chose to jump rather than burn. What a desperate choice. What a strange feeling to know that I’d been there, I’d visited a place that didn’t even exist anymore.

I worried about Kim, knowing she lived in the city, not knowing where she was working, how far away she was, if she was safe. Another of my cousins was living and working in DC at the time, so it was a pretty tense time until we knew they were safe. Then we started worrying for everyone else: those people who waited, thinking they’d be rescued. People who still needed rescuing. The heroic firefighters and paramedics who rushed in and never came out. Did you know that 411 emergency workers were among the dead? I don’t think I ever knew the number.

The thing that stands out to me most about that trip to the observation deck was waiting in line. We waited for what seemed like hours, in a roped off area that zigzagged across the lobby. We were surrounded by people of every ethnicity, from many countries, all speaking different languages. Coming from a less-than-multicultural state and community, to me this was noteworthy. It felt like a place where people coexisted peacefully, where there might not always be understanding but there was tolerance. It seemed like my ideal of being an American, the whole “melting pot” thing; how could you experience such diversity, look out at the Statue of Liberty, and not feel that? After 9/11 it didn’t surprise me to read that citizens from over 90 countries died in the attacks on the World Trade Center buildings. It saddened me to think of that place as a target of someone’s hatred. We lost a lot that day.

Every year I think how much things have changed since it happened. I think about the people who died and I send good thoughts to those who survived and who lost family and friends. Not long ago I read about those who were exposed to ground zero and how they had lingering problems with asthma and post-traumatic stress disorder for years afterward. I think all of us are still traumatized by this. I don’t think anyone who was there–or who watched from afar–will forget it.

Do you remember what you were doing on 9/11? What went through your mind? I’ve heard people talking about making this day a national holiday–what are your thoughts?