Three Things I Learned When I Lost My Mantra 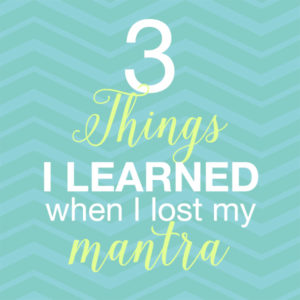 About a month ago, I realized my mantra was gone.

(I know, that sounds “woo-woo,” doesn’t it? I promise, unless listening to your inner voice is “woo-woo,” this post is not what you think!)

I’ve mentioned before that I’m an anxious person. It’s the kind of anxious that sends you to the ER with heart palpitations and home with a prescription. (The meds didn’t work, but talking did.)

In fact, talking helped a lot. So did listening—to the talking already going on in my head. Though I wasn’t always aware of it, the message was often, “You don’t know what you’re doing.” Left on their own, anxious minds chatter endlessly about things that make them more anxious. Maybe you’ve had this experience, too?

I learned that I couldn’t turn off the chatter, but I could change the message. With practice, I gave myself pep talks or repeated simple happy statements instead—what I came to call “mantras.” They were never really about meditation, but a realization that if my inner voice was going to talk anyway, I should try to make it say something useful.

It began like this: in the morning I would say, “This is gonna be a great day.” I’d say it to myself a few times, and found that when I “tuned in” later in the day, my brain was still saying it. Then for years my mantra was simply, “I have the best life.” It wasn’t about life being perfect; it was gratitude for having all the things I really needed and a lot of what I wanted, too.

That mantra became the soundtrack of my life, a sort of lyric looping in the back of my mind, occasionally bubbling up and out when I least expected it. It reminded me of all that was good in my life. It made me smile when I caught myself saying it. Best of all, it drowned out the “can’t, shouldn’t, won’t” chatter.

Lots of normal things, really. Health challenges, work frustrations. Then kids’ struggles. And when your kids are struggling, it’s nearly impossible to be “OK.” Somehow, with all of this totally normal turmoil, I forgot about the mantra.

It wasn’t until I started noticing that old negative chatter that I realized what had happened. I had lost my mantra. What did I learn?

What you say about your life matters

Back when I was saying the mantra every day, my life was far from perfect. But my focus was on the things that were going right. The underlying feeling about life was always positive, and that was partly because of the story I was telling myself.

The words you use to talk to yourself and about yourself have a big impact.

Gratitude is necessary for joy

While I’m not an unhappy person, these last few years have not been filled with the joy I used to feel in my life and work. Of course the normal stresses of that time are part of the reason, but not expressing my gratitude everyday is also part of it.

You can begin again and again

Though I feel sorta dumb for forgetting about the negative talk and how easy it is to change the message, I realized you can begin again anytime.

This morning I started like this: I said, “This is gonna be a great day.” I said it a few times, and found that when I tuned in later, I was still saying it.

I think I’ll still be saying it tomorrow.