The Word of the Week is…um… 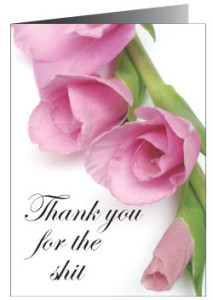 Yesterday I went to the local garden center and picked up a carload of seedlings, pots, peat moss, seeds and seed potatoes, —everything I needed to get my gardens and planters going. My parents had given me a generous gift certificate and when I got home and looked at my receipt, I realized that most of their contribution had in fact been spent on…umm…well, manure.

As I opened the bags and dumped out the rich, dark brown composted manure into my garden, I thought about the thank you card I’d send them for the gift. “Thanks for the sh*t,” I joked to myself, would be on the cover in flowery script. And inside the card, much as I was doing with the fertilizer, I’d lay it on thick. I tried lots of versions, but the one that kept coming back to me was: “Because there’s nothing better than sh*t to make the flowers grow.”

This was all meant as a joke (and probably I’ve been spending too much time with my 10-year-old son if I think this is funny) but the more I thought about it, the more I realized that this is true outside the garden, too. Even if you’re someone who deletes the expletives (and I admit, I am not always that person), there simply isn’t a better word to describe some of life’s complications and difficulties. Life is not always roses. Sometimes, lots of times, it’s stinky and messy. And I’m increasingly sure that we don’t get the roses without the stinky messy part.

I was watching Tavis Smiley recently as he interviewed author Bruce Feiler. You may remember Feiler from his book and PBS miniseries Walking the Bible. A few years ago this “walking man” was diagnosed with cancer in his leg; he underwent surgery and spent a year recovering. As he negotiated the world on crutches, contemplating not only whether he would walk again but whether he’d survive to see his twin daughters grow up, he decided he’d choose a “council of dads” who could convey to his daughters the different parts of himself if he wasn’t there to do it. The advice each man provided to Feiler’s daughters, along with what his whole family learned from the experience, is chronicled in his book The Council of Dads: My Daughters, My Illness, and the Men Who Could Be Me

(affiliate link). At one point in the interview, Feiler says, “The experience of contemplating death every day meant it didn’t actually weigh heavily on my shoulders. It’s actually kind of like an engine at your back.” It pushed him to make strong connections with these men from all parts of his life, to think about what he wanted to leave behind, and to build a community of friends which has changed his life. Everything that grew out of this fertile ground would not have been possible without the sh*t that came first.

If you are familiar with Craig Ferguson, the actor/comedian/late night talk show host, you may know that he won a Peabody Award last year for his interview with Archbishop Desmond Tutu. This particular show and interview ran again recently; if you didn’t get a chance to see it, I highly recommend watching on YouTube. (Many of the other versions of this have been disabled, so I apologize if this link isn’t working.) Ferguson asks Archbishop Tutu about his work and several times he refers to Tutu’s ability to remain positive and initiate reconciliation in situations that seem hopeless. Archbishop Tutu refers time and again to the resilience of people, the inherent good of people, how even in squalor people are able to laugh and smile, to help one another. He relates the story of a woman injured by a hand grenade blast. She survived the attack only to spend months in ICU, and further time helpless and dependent on her children for her most basic needs. Even Archbishop Tutu seemed awed when he shared this woman’s description of her condition: “It has enriched my life.” A situation that seemed to be complete…well, you know…turned into an “enriching” experience.

I know it’s crass, but the phrase “sh*t happens” is used so often because when it happens, it’s the first word we say. Getting cancer, being injured by a hand grenade—who would argue that this is some pretty serious sh*t? And yet in both of these examples, the individuals who lived through those experiences felt their lives were somehow richer. What’s more, in both situations the blossoming of these lives has inspired others. Feiler’s book is being used as a bridge to help others build their own families and communities, to make memories with them while they can. Archbishop Tutu is motivated to continue his work partly by remembering the magnanimity of those he works for, including this “victim” and her family.

So frequently you hear someone griping about their misfortune (I’ve done it myself!). It’s funny how a series of happy things makes us feel entitled, like things are always going to be good. We don’t see the true value of the inevitable sh*t: that living through it makes us stronger, more confident, more able and willing to take on challenges, more capable of helping others with our actions and our example. We forget that its real job is to show us what we’re made of, to provide that fertile ground from which our true selves can blossom. In fact, we really should be saying “Thank you for the sh*t.” Because there’s nothing better than sh*t to make the flowers grow.

What do you think? Do the best parts of life spring from the stuff we think we want to cast off and leave behind? What have you learned from the things you’ve lived through?