The Precautionary Principle: A Cautionary Tale

I’ve been inspired by the actions of WATCH (Women Against Toxic Cosmetics Harm) and the Alliance for a Clean and Healthy Maine, who (with the assistance of the Environmental Working Group and Campaign for Safe Cosmetics) sent away 12 common cosmetics products last spring to be tested for chemicals. Since they’ve already found the hidden toxins in my medicine cabinet, I figured maybe I’d take a look at what was going on in my fridge. I’ve been a vegetarian for more than 25 years and eat a diet based largely on whole, organic foods, so I was sure my food “tests” would come out clean. I was appalled by the results.

Carcinogens
• Formaldehyde
As it turns out, the apples, bananas, beets, broccoli, onions, cabbage, carrots, cucumbers, grapes, green onions, kohlrabi, pears, potatoes, spinach, tomatoes, radishes, and watermelon I have been feeding my family naturally contain 2 to 60 mg per kg of formaldehyde. The dried shiitake mushrooms my husband likes contain a whopping 400 mg/kg! As you may know, formaldehyde is classified by the EPA as a probable human carcinogen, and is known to cause cancer in rats.

• Safrole
With pepper out of the picture, I figured I’d turn to other herbs and spices to make my poison-laced meals more appetizing. But cinnamon and nutmeg are among many that contain safrole, which causes liver cancer in rats. Rats.

• Tannins
Who knew that my morning beverage was killing me from the inside out? Guess it doesn’t matter whether I choose coffee or tea, or head straight for the cocoa, because with all three I’ll be getting tannins, substances which cause tumors in experimental animals. (What a relief that people don’t consume coffee, tea, or cocoa in large quantities!)

Endocrine disruptors
I thought that by eliminating the parabens from my beauty products I’d be “safe” from endocrine disruption, but I was so misled. Lots of plants apparently have naturally-occurring hormone-like activity, in the form of phytoestrogens. There are high levels of these phytoestrogens in my carrots, legumes, broccoli, potatoes, cauliflower, soybeans, oats, rice, onions, apples, and coffee. Thank goodness I don’t drink beer, because they’re in that, too. Sure, these phytoestrogens are considered beneficial by some, but I also read that when sheep consume these natural hormones it can lead to decreased fertility. Their consumption also disrupts the normal cycles of female rats. And if things are bad for rats (particularly when consumed in grotesque amounts), they must be bad for us (even if eaten in moderation). Right?

Goitrogens, enzyme inhibitors, mutagens, antivitamins
The list goes on and on. It’s a horror show. All of my favorite foods have ingredients that, if not downright toxic, are capable of inhibiting enzyme action, vitamin absorption, and thyroid function as well as causing cellular mutations. Potatoes, tomatoes, eggplant, mung beans, Brussels sprouts, broccoli, parsnips, celery, and wheat are only a few. I’m a walking time bomb, eating my way to the next organ failure. 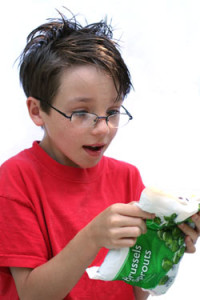 Now that I understand the dangers, I can’t believe that the government has been advising us to eat fresh fruits and vegetables every single day! Even The Harvard School of Public Health says, “Most people should aim for at least nine servings (at least 4½ cups) of vegetables and fruits a day.” They recommend, “Go for a variety of kinds and colors of produce, to give your body the mix of nutrients it needs.” What are they trying to do, KILL us??

I, for one, will not be brainwashed. You can tell me that these foods are “safe” and even “beneficial,” but I’ve done my research. I know the truth. I’m taking my cue from the Environmental Working Group and their Campaign for Safe Cosmetics, and adopting the precautionary principle with regard to my fridge. Anything that’s been linked to cancer in animals, or has estrogenic or toxic effects, will be banned from my diet. Until further notice, then, I won’t be eating apples. Or bananas, beets, onions, cabbage, carrots, cucumbers, grapes, green onions, kohlrabi, pears, potatoes, spinach, tomatoes, radishes, or watermelon.

But I’m not going to stop there. These foods are in every supermarket, and as The Story of Cosmetics suggests, we need to make sure that for items in our stores, the “choice to be safe and healthy has already been made.” Surely this must apply to our food, too? Take a look at your broccoli label. Where is formaldehyde listed on that package? Where are the goitrogens? The laws governing these labels are a travesty! I will not rest until my Evian label includes not just “water,” but also arsenic, fluoride, chlorine, barium, mercury, atrazine, copper, chromium, and any other measurable contaminants. 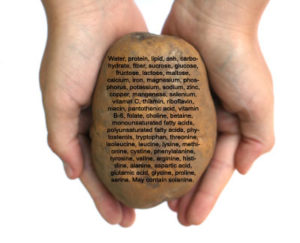