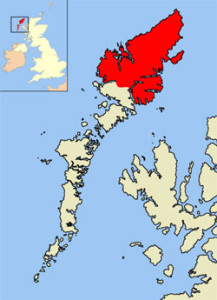 Several months ago I decided to start learning Scottish Gaelic. My dad’s mother was a Graham, and it’s only a few generations back to Scotland from their now-Vermont-based family. I’ve always shared this name, and it’s made me feel connected to them and to this place.

As I suspected, there are not enough hours in a day for me to give this amazing language the attention it deserves (and requires) to develop any sort of fluency. I listen to the practice CDs with amazement, and follow along in the book as well as I can, but I am fairly certain that my level of skill will hover somewhere around “appreciation” indefinitely!!

But an interesting thing happened when I started “learning” Gaelic: out of the blue, I began to get email inquiries from Scotland! Just today I was preparing to ship to the Isle of Lewis, and had to do some Googling to add this to my mental map (see the map above with the Isle of Lewis in red). This is part of the Outer Hebrides, and Barvas (Barabhas), as it turns out, has the highest concentration of Scottish Gaelic speakers in Scotland (around 75%). Isn’t that amazing? Just for comparison, in mainland Scotland the concentration of Gaelic speakers is not higher than 25% in any parish. The lucky thing for me is that most of these folks also speak English! But it definitely has encouraged me to keep at my studies.

I have to say this is one of the coolest parts of my job. I spend time working with people on their weddings or bridal showers (or hen’s nights) halfway around the world, and as Laura in Renfrewshire told me, “it certainly doesn’t feel like you’re so far away.” So here’s a big Tapadh leibh (thank you) to Laura, and to Rachel in Barvas, and to Lynne, whose project is still in progress–it’s been so much fun working with all of you!