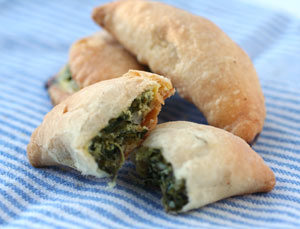 In Nora Ephron’s new film Julie & Julia Julie Powell tries to cook all of the recipes from Julia Child’s first cookbook. I wish I could say that I’d tried all (or even most) of the recipes in any of my cookbooks, but when it comes to cookbooks, I’m more of a “dabbler”.

I like to try a recipe here and there, and I rarely prepare a dish the same way twice. This recipe is an exception. It’s from The Philadelphia Orchestra Cookbook, which was a wedding gift from my mother-in-law. I don’t “entertain” much, but have used this recipe for appetizers, side dishes, hors d’oeuvres, even picnics. They’re called “Spanikopites” but this crust isn’t like phyllo, and I have come to think of these as mini quiches. They aren’t difficult, just a little time-consuming. Fuss now, and the resulting deliciously cheesy spinach pockets can be frozen after assembly and popped in the oven when needed. Any parties coming up? Try these (or a variation!) and let me know what you think. (This recipe claims to result in about 110 pieces, but I usually get somewhere closer to 80.)

Cream butter and cream cheese together, then incorporate flour, working with hands until it gathers into a ball. Chill for a few hours. 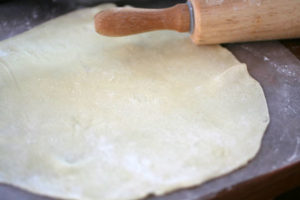 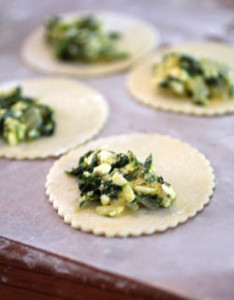 Prepare spinach according to package directions; drain well, and place in large mixing bowl. Saute onions in olive oil until translucent, then add to spinach. Add salt and pepper, dill, cheeses, and eggs, and mix well.

Roll out chilled pastry on floured surface until it’s 1/8″ thick. Cut out circles 2 1/2 – 3 inches in diameter (use biscuit cutter or water glass). Place 1/2 tablespoon of spinach filling in each circle and fold pastry over filling, sealing edges with the tines of a fork. You can freeze them at this point (freeze on a cookie sheet, then store them in freezer bags). Bake fresh or frozen at 375° for 20 minutes or until golden brown.

Mix this up by adding some mushrooms to the onions while they’re cooking, leave out the spinach, then substitute Parmesan and Swiss for the cheeses. Or for you meat lovers out there, how about a ham and cheese variation? Any greens would work in place of spinach; lots of cheeses would be wonderful, and even low fat varieties are delish. I have made these with 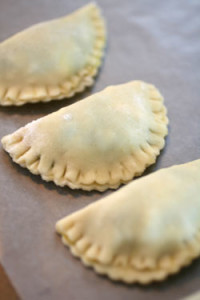 reduced fat cream cheese (try the Philly Neufchâtel cheese) and low fat feta and they still have excellent flavor. (Just make sure that the cream cheese you choose can be baked…some of the low fat versions are not meant for baking.)

You can play around with the size, too—try a two-crust quiche, then cut into triangles for serving.

Let me know if you think of any other variations!