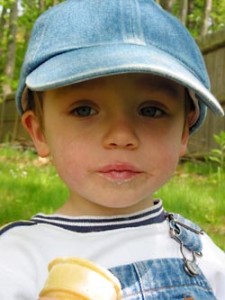 I have often considered my kids picky eaters. They do the typical kid stuff, going on kicks where they won’t eat certain things at all, or will ONLY eat a few foods. But these have always been phases. They outgrow them and move on to something else equally exasperating.

This story provides some perspective (and proves that you can ALWAYS find someone worse off). Imagine having your child eat her first food at age 10. The girl in this story was born prematurely, with a gap between her esophagus and stomach. The medical issue was fixed, but she had a “food aversion” and required tube feeding until just recently.

It’s one thing to complain that your children don’t eat their vegetables, but imagine if you never got to share ice cream with them, or lollipops? Or chocolate?! Think about those priceless photos you took when they ate their first birthday cake (or first lima bean!). Think about how many fun food things they’d miss! I don’t think I’ll be complaining about my kids’ eating habits again!