“Painting was always my first love” 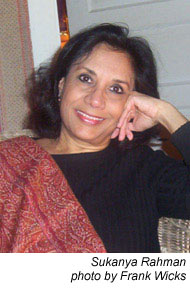 As the third generation of an Indian-American family with a legacy of dance, Sukanya Rahman of Orr’s Island, Maine was “sidetracked” into dancing as a young woman. She spent years studying and performing Indian dance with her mother, the famous dancer Indrani Rahman, experiences chronicled in her 2002 book Dancing in the Family. Yet she says it was “always in my plan to come back to my artwork.” I spoke with Rahman several years ago to discuss her then-new venture, a collection of note cards based on her painting and multimedia work and offered through her company, Harpswell Designs. Rahman has recently found yet another means of expressing her first love: Sukanya Rahman Studio offers fine giclée prints of her original mixed media paintings and digital assemblages, available framed or unframed. 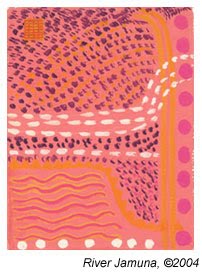 Rahman’s creation of mixed media work as well as its expression in cards comes naturally to this Calcutta native. Her father, Indian architect Habib Rahman, provided the example by creating collages from family pictures and making his own note cards for correspondence. Even when she was immersed in the dancing life of her mother and grandmother, Rahman kept a sketchbook and “never bought cards in a store.” She xeroxed her artwork to create cards for family and friends, who finally urged her to start offering them as a business. When the note cards sold out at a trial run during Thanksgiving of 2003, Rahman had an “ah-ha!” moment: “If they can sell here and appeal to New England audiences, it can go anywhere.” Rahman’s cards have been featured in The Asia Society’s store in New York, and are currently available online at Harpswell Designs. 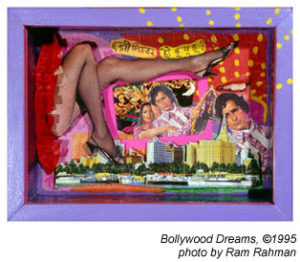 Rahman looks at her giclée prints as additional ways to share her work. They are ideal for people who can’t afford an original piece of artwork or who “don’t have room for a larger piece.” In addition, many of the original pieces featured on her prints have already been sold; note cards and prints make these pieces available to a wider audience. While some have urged her to create Christmas cards or Mother’s Day cards, Rahman says her cards “can be used for all those occasions.” 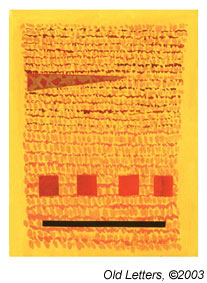 ahman studied painting at the Ecole Nationale des Beaux Arts in Paris as well as at the College of Art in New Delhi. Her work has a strong Indian influence “in terms of color and texture,” but she finds inspiration in modern American and European art, as well. “I think my primary drive is color,” Rahman says, which explains her fascination with Indian street art, calendar art, and “kitsch”—not the “high art” that her mother appreciated. Rahman “scours the bazaars and the back roads in the old part of town” for the materials to create her collages and multimedia pieces. The connection she sees in her network of friends on three continents also seems to be reflected in her work, which comfortably juxtaposes East and West, the exotic with the familiar. To Rahman, the creation of these works from the “forbidden fruits” of popular Indian art has been “a liberation.”

And what of the dancing side—does this still influence Rahman’s work?
“Absolutely. Absolutely. You know, I have a thing with movement in my art. I love color and movement. I found a very old painting of mine…I did this when I was 16 or 17, and it had the same movement. To me (painting and dancing) are interrelated… ultimately they have to do with a means of expressing oneself. I’m really bringing out what’s inside me; this is what I do!”