Skip to content
Home/Just Thinking/Out of the Box or In?
Previous Next

Out of the Box or In? 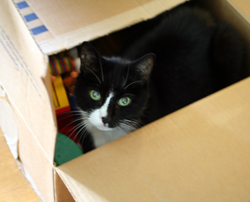 Last week I spent some time cleaning my house, which means lots of extra boxes. And boxes must always be inspected. Meet Inspector Nardo.

Nardo (short for Leonardo—the painter, not the actor) spent a good ten minutes digging at the closed flaps of this box before they yielded to his persistence. As I watched him, it seemed strange to me that anyone would expend so much effort getting INTO a box. I mean, hasn’t he heard all of that advice about boxes and the importance of being (and thinking) outside of them?

Of course he’s a cat and none of that advice is literally about boxes, but it occurred to me that I’m not much different. When new “boxes” appear (think of Facebook), I’m right there digging away at the flaps, trying to get in. Everyone else is in there, so it seems like the thing I’m supposed to do. Once we’re all inside, we even do the same things that Nardo does: we poke around, digging into each corner to see what’s there. We leave nothing untouched, and once we’re satisfied that we’ve seen it all, we make ourselves a comfy spot and settle in. Until the next box comes along (hello, Google+) and we start all over again.

Social media isn’t the only place that this happens. Think about fashion, or anything that’s trendy. If you have a business, think of the “new” products that your competitors come up with…and how quickly everyone else comes up with their version. Just like Nardo, we think we’re missing something if we’re not in the “boxes” with everyone else. And just like Nardo, we’re hot to abandon one box if a new one comes along.

But I watched Nardo for a bit longer that afternoon, and I’ve decided that he’s way ahead of me. After digging so hard to get inside, he spent all of five minutes in this particular box. It was full of Legos, so it wasn’t a good fit for him. After an afternoon of poking around in the other boxes, he made his way back to his bed, a spot near the window where he can keep an eye on his yard, his people, and his food dish: all of the essentials. Nardo checks out the boxes, but always goes back to what works best for him (which, notably, is out of the box). I think I’ll try to remember that next time.

Is it important to follow what other people are doing? Or is it better to make your own way? Maybe a combination works best? What do you think?