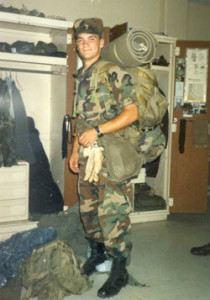 A former classmate of mine, Todd Defreitas, was interviewed for his local newspaper in Williamstown, Massachusetts. In the feature, Todd shared memories of his time in the U.S. Army as well as describing the lasting effects of that service.

To me this was an important reminder of the significance of this day. While it is intended to commemorate those Americans who have died in service to the country, I think it’s important to consider those who have survived but have given so much of themselves that they will never be the same. The sacrifices of our men and women in uniform are tremendous and should never be forgotten.

“In war, there are no unwounded soldiers.” ~José Narosky

(The photo above is Todd in basic training, age 18.)