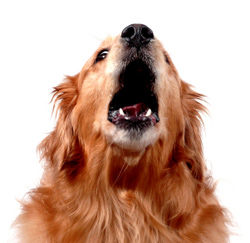 My neighbor has a sweet golden retriever named Sofi.

Sofi likes to “visit” other yards, so on more than one occasion I’ve walked her down the road and popped her back through the gate. This friendly, wagging canine trots silently along, easygoing until the gate closes between us; then the amiable soul becomes a frantically barking maniac.

The first time this happened, I found it alarming; I figured it was just that she didn’t know me very well, or that she was upset about being back in her yard. Recently I learned that she does this to her own “mom,” barking crazily when my neighbor closes the gate between them. Then I found it kind of amusing: I guess that being on the other side of the fence makes everyone–even mom–look like an enemy to Sofi.
I wish I could say this is a trait exclusive to dogs, but of course it isn’t. I can’t count the number of times I’ve “barked” at someone for having a different opinion, for being on the other side of the fence from me. How often have I discovered later that the differences were small, that those people were friends, that we really were all on the same side?
Discovering that a friend is now on the other side of the fence can feel like a betrayal. Separated by different points of view, the easiest thing is to bark our anger and hurt feelings. This approach makes things worse. Just as I’m hesitant to re-open the gate to that furious dog, barking at each other keeps us at arm’s length, often just when we most need each other’s support. Isn’t there a better way?
I tried, but no amount of sweet talk helps with Sofi. She simply will not be soothed. But she’s a dog, and it’s her nature to bark. I know it isn’t mine. I know that there’s a whole lot less to bark about when you can find common ground with someone, when you realize that with most things you’re on the same side. So I’m going to try something new: No more barking.
What do you think?
By Emily Caswell|2011-07-25T00:07:00+00:00July 25th, 2011|Just Thinking|2 Comments