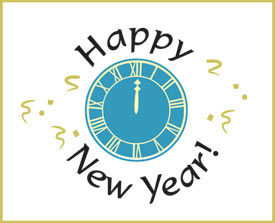 I think this is my problem with New Year’s Resolutions. They feel like a blame game, where we lament how much thinner, richer, and happier we could be if we’d done the right things, and make lists of all the things we regret about last year and ourselves. But we always seem to stop at “officially” accepting the blame and making the list, and rarely follow through and make those changes.

This year I’m not going to make any New Year’s Resolutions. They don’t work. The only way I’ve ever changed anything is by making it a habit, so I’m going to choose some new New Year’s Habits, instead.

You’re probably wondering what I’m talking about! Here’s an example: if you have ten pounds that you’d love to lose, I’ll bet that’s at the top of your list of resolutions. (I personally had 15 pounds at the top of my resolutions list for years.) How do you turn “Lose 10 pounds” into a habit rather than a resolution?

My new habits for 2009 will not involve calorie counting, but I do plan to log more minutes on my treadmill. And probably I’ll have to resort to wearing a timer to limit the hours I spend on my computer. (Hey, it’s a hard habit to break.) I’m going to add a weekly trip to my local library to start tackling that reading list. I haven’t done enough reading in the past few years, what with the computer habit. As my friend would say, I blame myself. But I’m hoping these new interests can be just as habit-forming.

I have a few other ideas for 2009 Habits. What about you? Do you make resolutions every year? How many of them do you keep? Want to join me in choosing New Year’s Habits, instead?! Please share your comments!