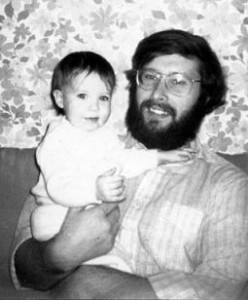 For the past week I’ve read lots of advice from other bloggers’ dads. Of course I planned to share my own father’s words of wisdom, but if you know my dad, you know how hard that is. It’s not that he isn’t wise, because he certainly is. And it’s not that he didn’t teach me lots of things. But until fairly recently, my father wasn’t much of a talker. He’s always been a thinker, a listener, a doer, but not ever someone who made small talk. While my mom had encouraging words, my dad encouraged me by what he did.

My father is a structural engineer, but he knows how to do a lot of other things. Growing up I watched the care and attention he put into everything. Whether he was designing and building our house or baking a loaf of bread, he clearly felt it was always worthwhile to do things properly. That attention to detail was even more important in his work; I know I feel safe crossing the bridges that he designed! It also made a big impression on me, as I try to take the same care with my work, too.

In 1984, Apple introduced their Macintosh computer. My dad bought one of the original Macs, which meant that as a young teenager I got to work (and play) with the first popular personal computer. I know it doesn’t sound like a big deal now, but at the time that was really rare. While other people were shying away from new technologies, put off by the learning curve or the expense, or simply misunderstanding their potential, my dad was excited about them. He always has embraced these new tools and instead of being afraid of what he didn’t know, he’s approached new challenges with enthusiasm. Early exposure to the tools AND the enthusiasm for them have defined my whole work life. Without the example of someone embracing the new and different, I’m not sure I would have dared to do some of the things I’ve done.

In fact, without Dad’s example, I’m pretty sure I wouldn’t have become an entrepreneur. When he was in his late 30s he left a job to start his own company. While going out on your own is risky at any time, he had two teenagers rapidly approaching college. Last year I read this article about how “Dads empower kids to take chances.” One of the dads talked about the things he did with his kids, and how there were “life lessons” in them: “if you take a little risk,” he noted, “there will be rewards.” I watched my father leave a less-than-perfect job situation to create a better life for himself and all of us; I don’t think it’s a coincidence that my brother and I both have our own businesses.

I don’t really remember my dad sitting me down with words of wisdom, or literally giving me advice for how to live. But I learned from him that if you’re going to do something, it’s worth doing it right. I learned that you should embrace new things without being afraid of what you don’t know. And I learned that there’s a lot to be gained by taking even small risks. I’m grateful for all of that and so much more today.

What did you learn from your dad? If you are a dad, what are you trying to teach your kids? Are you telling them, or showing them by your example?