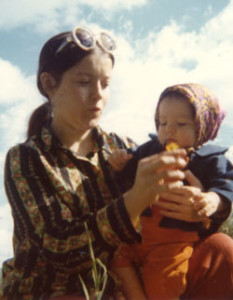 Mother’s Day card. It’s not that I disagree with the sentiments; I nod along as I read them in the store. But they just don’t get the whole story.

For example, I recently realized that I was eating the heels. No, I don’t mean Jimmy Choos, I’m talking about those slices of bread at each end of the loaf. Most people skip right by those pieces to get to the choicer slices; growing up, it seemed like my mom was the one who ate them. I had a sense of satisfaction a few weeks ago when I realized that I was choosing those slices, myself. It made me feel like maybe I picked up on some of her selflessness after all; somehow I learned to save the choicest pieces for other people. There’s no Mother’s Day card that talks about eating the heels.

There’s also no Mother’s Day card that talks about being tough. When my parents were in a car accident in 1998, my mom suffered a broken neck and was in a halo for a month. Through her time in intensive care, multiple surgeries, and weeks of physical therapy, I found myself encouraging her with familiar words: “It’s a good thing you’re tough.” I can’t count the number of times she handled my skinned knees or hurt feelings with those words. I didn’t always feel tough, but she said it because she knew I could be, that someday I’d need to be. Sometimes when we feel weak, we need someone to believe that we’re strong so we can believe it, too. My mom always did that for me.

What moms believe—and what they say—can be so powerful! I was a fearful kid who grew up to be an anxious adult. It’s just how I’m wired; I worry about the littlest things, and it’s made me more hesitant to try new things. My accomplishments were made possible by my mom’s words. If your mother tells you that you can do anything, you eventually start to believe it. It’s something I try to do with my own kids now, to see their potential (even if they don’t) and remind them of their possibilities.

I couldn’t find a card that said thank you for being so tough, selfless, and encouraging—and for helping me to be that kind of parent and person, too. That’s the kind of card I needed for the kind of mom I have. Maybe I’ll have better luck next year?