I have been making so many Mimosa Lip Balms lately for bridal shower favors and bachelorette parties that I have Mimosas on the brain! Last week I was wondering what a Mimosa cupcake would taste like, and then I realized it would be much more fun to see what a Mimosa Whoopie Pie tasted like. 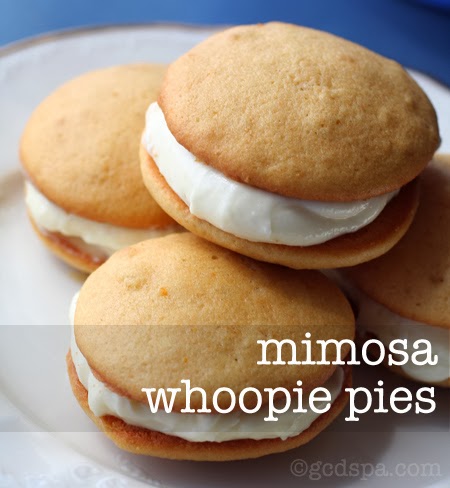 Whoopie pies have been in our news lately here in Maine. Earlier this year our legislature considered naming them the official state dessert, which started a “food fight” with Pennsylvania. It seems that both states claim to have invented this dessert, and Pennsylvanians were appalled that Maine would claim the dessert as our own. Of course my husband (who grew up in Philly) votes for PA, and as a Mainer, I’m…staying right out of it! (They decided to make it the official “state treat” instead.)

Wherever it originated, the whoopie pie’s appeal is universal. Its flexibility is also impressive: the original chocolate-cakes-sandwiching-vanilla-filling recipe can be easily modified for some interesting flavor combinations. Chocolate and peanut butter. Pumpkin and cream cheese. Or how about orange and champagne? Sounds like Mimosa! Here’s what you’ll need: 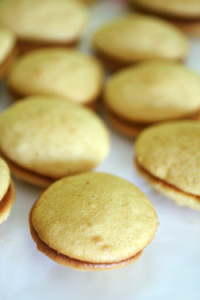 Preheat oven to 375 °. Cream the butter and beat in eggs, sugar, and orange oil. Sift flour and dry ingredients into a separate bowl, then beat half of dry ingredients into the butter mixture. Follow with the milk, then remaining dry ingredients, then juice. Stir in orange zest, if desired. (I added about 3/4 tsp of zest). You can also add a bit of red and yellow food coloring if you wish for a darker orange color.

I made mini whoopies which ended up being 2 to 3 inches in diameter. Drop batter by the teaspoon onto an ungreased nonstick pan. Leave a few inches between cakes, since the batter will spread as it cooks. Bake for 6 to 8 minutes, or until edges are barely browned and cake top bounces back when touched. Transfer to cooling racks. Once cakes are cooled, pair them up, choosing cakes that “fit” the best with each other. 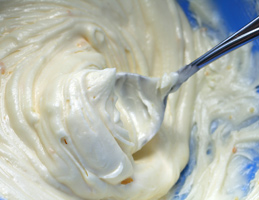 Cream butter and shortening and add sugar. In a small saucepan heat orange juice and flour, stirring constantly until it thickens. (I didn’t boil this, just heated gently with constant stirring.) Allow this mixture to cool, then add to the sugar mixture and beat until fluffy. Stir in flavoring to taste (start with a small amount of champagne flavoring and add more if needed), and zest if desired.

You may want to chill this filling before spreading; I found it “thicker” when it was a bit cooler. Spread a generous amount on one cake, then top with its match. Wrap pies individually to avoid “sticking” (or for freezing—they taste even better straight from the freezer) or place in layers with wax paper between.

This recipe makes 30 to 32 tiny sandwiches. I LOVE the idea of serving these at a bridal shower! The tiny size is just right to be added to a dessert table.

What do you think? Do you like whoopie pies? What flavor combinations do you enjoy?