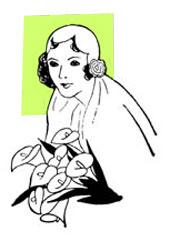 Last week I read this article: Top Sex and Marriage Advice Through the Ages. The article says that as marriage and people’s reasons for marrying have changed over time, couples have looked to experts for advice to improve themselves and their relationships. A steady diet of wedding advice has been served up by doctors, educators, and writers from the early 1800s to the present day. Some of the old advice is quaint and dated, while other tips seem timely and sensible even though they were written over a hundred years ago.

My parents are celebrating their 42nd anniversary today (Happy Anniversary!). June is by far the biggest wedding month, and as I thought about the thousands of couples preparing to say “I do,” I realized that the real experts on marriage are people like my parents, people who are married and have found ways to make it work. I decided I’d ask people, young and old, what they thought made a successful, happy marriage. Then, just for fun, I compared that advice to the tips that writers and experts have been sharing for centuries. 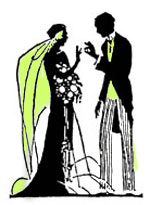 If you look at a list of marriage quotes, you realize that there is no shortage of marital advice from centuries past. For example, William Penn, the founder of Pennsylvania, said, “In marriage do thou be wise: prefer the person before money, virtue before beauty, the mind before the body; then thou hast a wife, a friend, a companion, a second self.” Penn was a young man during the 17th century, but a bit of that marital advice was also shared in the present by Pat, who has been married for more than 40 years. She says that if you want to have a happy, successful marriage, “You should enjoy doing things together. You’ve got to be friends first before you’re partners in marriage.”

In the book Fascinating Womanhood, by Helen D. Andelin, a list of “Do’s and Don’ts” for wives includes the following: “Do revere your husband and honor his right to rule you and your children; Don’t stand in the way of his decisions, or his law.” What I find interesting is that the two pieces of marriage advice I received from men (one married 15 years, the other more than 40) mention the importance of balance in a relationship. “One person can’t do all of the thinking and work for both of them,” one said, while the other added, “You can’t both be strong all the time.” At least for these men, sharing the “right to rule” is more comfortable in a marriage.

For myself personally, as well as one other person I spoke with, what is also comfortable in a marriage is humor. I’ve written about this before, and I’ll say it again: my husband and I are goofy, and it works for us. Sharing a good laugh connects us with one another because, as my friend Kristina notes, “laughing together is such a good feeling.” It’s like Charles Dickens said, “Come, let’s be a comfortable couple and take care of each other! How glad we shall be, that we have somebody we are fond of always, to talk to and sit with.” And laugh with! 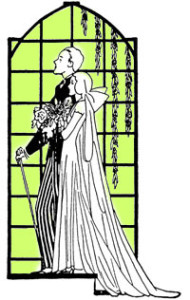 Pearl S. Buck said, “A good marriage is one which allows for change and growth in the individuals and in the way they express their love.” Kristina noted the importance of expressions of love in her marriage, saying, “One of the things we do well is communicate. It takes so many forms: the daily sharing; compliments; being clear (‘My grumpiness doesn’t have anything to do with you, and I’m sorry if I’m taking it out on you.’); thanking each other for day-to-day things (‘Thank you for mowing the lawn. It looks really good.’).” Clearly there are lots of different ways to show that you care and to express love for another person. As relationships grow and evolve, communication is key.

The most common piece of marital advice came from the youngest AND the oldest people I spoke with. My grandmother, who has been married for nearly 65 years, shared the tip she remembers her mother giving her: “Never go to sleep at night without working out things that bother you. The longer you harbor something, the bigger it grows.” Advice from my great grandmother, who was born in 1892: Don’t go to bed angry. Which might have been what Leo Tolstoy was getting at when he said, “What counts in making a happy marriage is not so much how compatible you are, but how you deal with incompatibility.”

How about you? What do YOU think makes a happy, successful marriage? Did you get good advice from friends, parents or grandparents when you were getting married? What would you share with a soon-to-be wife or husband? Please share your thoughts.