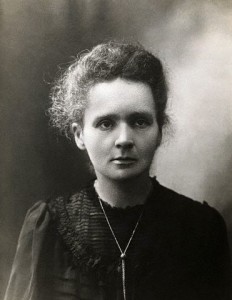 A while ago one of my Facebook friends posted a photo taken at 1927’s Solvay Conference. As I scanned the caption, noting the familiar names from my physics and chemistry classes (remember Schrödinger, Heisenberg, Bohr, and Einstein? Anyone? Beuller?), I noticed the lonely-only woman right there in the front row. In addition to being the only representative of her gender, Marie Curie was the only physicist present who had received two Nobel prizes. She was the first female laureate, as well as the first person to be honored with a second Nobel prize. The more I read about her accomplishments, the more inspiring she seemed. It was only after I read a biography of Curie, though, that I realized just how many things we can learn from her. Here are just 3 of them:

1. Be persistent.
Curie’s family didn’t have the money to send her to school, so she and her sister took turns working to put each other through university. When Curie returned to Poland with her degree, she was not hired at Kraków University because she was a woman. She returned to Paris and eventually became the first female professor at the Sorbonne.
“Life is not easy for any of us. But what of that? We must have perseverance and above all confidence in ourselves. We must believe that we are gifted for something and that this thing must be attained.”

2. Keep your sense of wonderment.
Isolating pure radium from pitchblende was an arduous, tedious process that took years of Curie’s life. But this is how she described the materials in her laboratory: “…arranged on tables and boards….At night…from all sides we could see slightly luminous silhouettes, and these gleamings, which seemed suspended in darkness, stirred us with new emotion and enchantment…. It was really a lovely sight…like faint fairy light.”

3. Use your powers for good.
When WWI broke out, Curie helped to create portable x-ray machines that could be driven onto battlefields. She helped to train women to operate these inventions so they could locate bullet fragments in wounded soldiers, assisting with surgeries.
“You cannot hope to build a better world without improving the individuals. To that end, each of us must work for our own improvement and, at the same time, share a general responsibility for all humanity, our particular duty being to aid those to whom we think we can be most useful.”

On Curie’s 144th birthday, I’m remembering these lessons. Which of Marie Curie’s many accomplishments do you find inspiring?