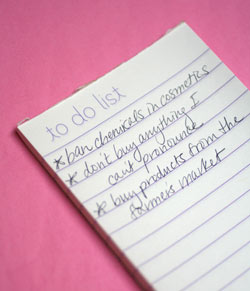 If there’s a Truth about safe cosmetics out there, I feel like it should be on a list. Everywhere I look lately people are talking about them. Apparently, safety is all about the lists.

For example, the European Union has a list of 1,364 chemicals they’ve banned from use in personal care products. The U.S. list contains only 8 banned chemicals. I’m hearing about this list all the time. People say, “Imagine how dangerous U.S. cosmetics are if our list only has 8 banned chemicals!” Apparently some of us have list envy and want to make a larger list of banned chemicals. The truth is that of the 1,364 chemicals on the EU list, only 6 of those chemicals have been used in cosmetics. As long as we’re making lists of things that aren’t even used in cosmetics, why stop at 1,364? I’ll bet I could come up with 13,640 things, or 136,400. Heck, we could come up with millions if we weren’t too busy making other lists!

Which is exactly what we’ll be doing if this new legislation for safe cosmetics passes. If I can afford to stay in business at all, I’ll be very busy making lists for the FDA. I’ll start with the list of my products, as well as the lists of ingredients that go into them (to the tiniest part per billion), and a list of the safety data for them. Then I’ll be listing all of my suppliers, along with lists of all of the things I buy from them. If and when I have employees, I’ll be listing them, too–and then updating them whenever I hire or fire. And I’ll also have to list my gross sales figures, even though I’m a privately owned company. By the time my lists are added to the thousands of other companies’ lists, there will be millions of pieces of data listed in the FDA’s cosmetics database. That, my friends, is a really big list. 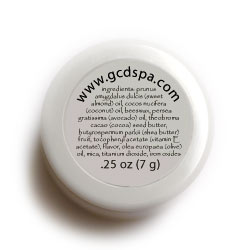 But that’s not the only big list we’ll be dealing with. You know how I mentioned above that we’ll have to share lists of our ingredients, down to parts per billion? Those ingredients will have to be listed on my labels. Here’s a picture of one of my lip balm labels as it appears today. Here’s a blog with a list showing how three common natural ingredients become a list of more than 115 ingredients when you include all trace components. My lip balm pictured here has 10 ingredients. How are the trace components of all of them going to fit onto this 1″ diameter label? And just out of curiosity, what happened to the recommendation to avoid “ingredients I can’t pronounce”? Or the recommendation to buy “simpler” products with “shorter lists of ingredients”? This law will create just the opposite kind of ingredients list: the longer, more complicated, difficult-to-pronounce kind.

Listen, I like making lists as much as the next person. When I have a particularly busy day planned, I make a list of the things I need to do. Sometimes I even add a few things to the top of the list that I’ve already done, just so I can cross them off. I know it’s not productive, but it looks good and it makes me feel better. Making long lists to ban ingredients that were never intended to go into cosmetics is just as unproductive: it may look good, it may make us feel better, but it doesn’t do anything to make cosmetics safer.

Likewise, a ginormous list of products, ingredients, suppliers, supplies, employees, and gross sales figures is not useful simply because it’s big. A list can be lots of things: it can serve as a reminder, a call to action, a way to mark progress, a guide to help us in decision making. But a list that is simply entered into a database and not interpreted or acted upon will not make cosmetics safer–which is the proposed purpose of this legislation. Who will have the time to review the million-and-one entries in this new database? Who will check my ingredients lists? Who will determine from (of all things) my sales figures, the number of employees I have, and the suppliers I use that I am making personal care products safer for my customers? The FDA? They’re pretty busy at the moment with eggs and deli meat. They’re struggling to enforce laws that already exist, looking for more power just to keep food safe. They’ve even been having trouble with drug safety; remember the children’s Tylenol recall?

This new law will require tremendous increases in staff and resources at the FDA to enforce it. If the FDA is so understaffed it cannot maintain food and drug safety, it’s not clear that these resources will suddenly be available to regulate cosmetics safety by reviewing scads of lists. Without people on the other side of this database to think, interpret, and act on the information, the biggest list in the world won’t make our personal care products safer. A list like that is just expensive busywork that will put small companies out of business. A list like that is just a bunch of words.