Knowing What To Do 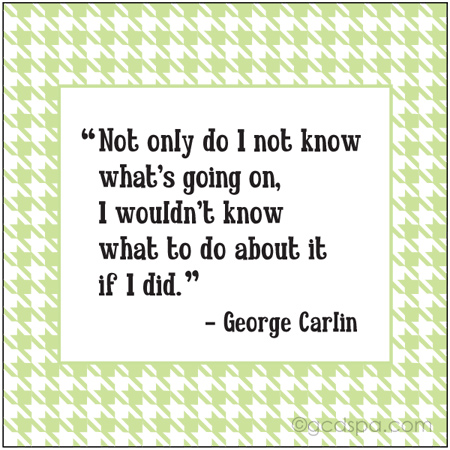 Knowing what to do

Last week, right in the middle of a conversation, I realized I had no idea what to do. I was catching up with a friend whose last six months have been tough. Her kids have been struggling and she was clearly upset about their decisions. I wanted to help, but I wasn’t sure what to say or do.
So I did the usual stuff (hugs) and said the usual stuff (“I’m sorry”). I still felt really helpless. I tried to be helpful and comforting, but I don’t think anything I said was either of those things. Instead, I chattered on, later kicking myself for saying anything at all. Has that ever happened to you?
When I saw this George Carlin quote today, I nodded (and laughed) because this is just how it felt. Life is full of hard times, and most people go through them without sharing the details. When you do hear about it, you realize just how clueless we are about others’ struggles—and how hard it is to figure out what to do, even through our own hard times.
Another of my favorite George Carlin quotes is, “Always do whatever’s next.” But what happens when you don’t know what’s next? What do you do when you don’t know what to do?
By Emily Caswell|2013-06-17T18:47:00+00:00June 17th, 2013|Just Thinking|0 Comments