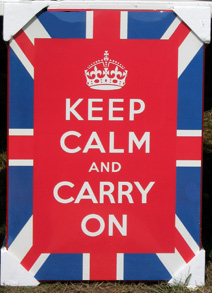 This poster was on display at Maine Highland Games on Saturday. I debated picking one up because I think it should be my new mantra.

The original design was created in Britain early in World War II by the Ministry of Information, which thought that British citizens might need a boost to morale. The threat of invasion would cause anyone to freak out, but happily I don’t require anything anywhere near as serious!

Last week I had more than a few “freak-out” moments. Does that ever happen to you? You start making your to-do list and it’s growing faster than you can get it done. (Or hey! Get it started!) I even posted about it on Facebook, commenting that I was gonna try something different for a change and do the first thing without freaking out about the second. The number of comments makes me think this is a common feeling among my friends!

Sometimes I joke that the first thought when I start my day should be “Don’t panic!” And I’m not even a brain surgeon or a rocket scientist. What I love about this poster is that they felt it was important for EVERYONE to remain calm and carry on. Not just “important” people, but everyone. Things run smoothly when everyone does their job. And it’s a lot easier to do your job when you aren’t freaking out.

If you need me this week I’m the one over here, keeping calm and carrying on. How about you?