Skip to content
Home/News/Inspiring Story of the Week!
Previous Next

Inspiring Story of the Week! 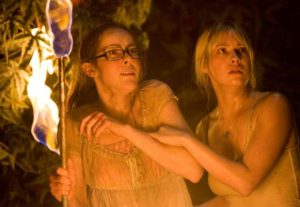 I got an email from Amazon today letting me know that as someone who has purchased horror movies in the past, I might be interested in this new movie called “The Ruins” which opens in theaters today. I got such a kick out of this because I’ve been keeping track of this movie since it was being filmed last summer in Australia.

This movie was directed by Carter Smith, who was a classmate of mine in high school. I find his story so inspiring that I just had to share it. Carter went to the Fashion Institute of Technology in NY, initially for fashion design, but then studied fashion photography. He had a successful career in photography, with his work appearing in GQ and Vogue. But he was always interested in film, so a few years ago he wrote a screenplay adaptation of a short story, then self-financed and directed a short film. The film, “Bugcrush,” went on to win the jury prize for short filmmaking at the Sundance Film Festival in 2006, and got lots of attention. Carter was given the opportunity to direct “The Ruins” based largely on his work on “Bugcrush”– apparently Steven Spielberg was a fan, and Scott Smith, the author of “The Ruins,” also admired Carter’s film.

What I love is how Carter created these great opportunities for himself. He made “Bugcrush” on his own dime (filmed it at our local high school here in Maine), and had the confidence to submit it to Sundance. That’s a lot of belief in himself, his creativity and vision, and I find that so inspiring! So many times you hear people talk about why they can’t do something–not enough money or time or support–it’s all about the excuses. I love that these new opportunities came to Carter from his investment in and belief in himself and his work. (Here’s what Carter himself said in another recent article: “The best thing you can do as a filmmaker, as a photographer, a writer, whatever you want to do, is really follow your vision. And I think that by staying true to yourself and the story that you want to tell, and the way that you want to tell it, that’s what people are looking for and respond to.” YES!!)

When I read in the local paper that the movie premiered in LA on Wednesday, I did a little search for premiere and after party photos, and had so much fun seeing my former chem lab partner posing with Jena Malone and Ben Stiller! Way to go local kid! Keep up the good work!