In Defense of Small Things 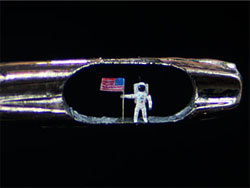 This morning I read an article about artist Willard Wigan, a man who creates sculptures small enough to fit inside the head of a needle. I just had to share this–his story is incredible. There’s a slideshow of his work with the article.

Different people, from art critics to curators and even scientists, have weighed in on the significance of his work and process. His own take on his work is that it is “a defense of small things…It is showing people what they can overcome.” When you read about his early childhood dealing with undiagnosed dyslexia, it’s clear what an impact that “belittling” had on him and on his view of the world.

He had a built-in excuse to fail, was the classroom poster boy for failure. Instead, he has become a successful micro-sculptor, selling his work for millions. It’s amazing to me how that childhood humiliation shaped his vision. Without the criticism and pain of those early years, he probably would not have developed into the artist he is. I guess it is as Mary Case says: “No pressure, no diamonds.”

What do you think of his story and his sculptures? Do you have a new appreciation for “small things”?

Photo of Willard Wigan’s work “Moon Landing”, part of an exhibition called “Art in the Eye of a Needle: Micro-sculpture by Willard Wigan”, on display at the Parish Gallery in Georgetown through Jan. 23.