“I don’t let my disability get in my way”

When you first meet Stewart Caswell you might notice his crutches, or perhaps his main mode of transportation, a scooter named “Gunther.” By the end of your visit, you won’t remember how he entered the room—but you’ll never forget his direct manner, friendly smile, and infectious chuckle (punctuated by wheezing if he really gets going).

Stew is my cousin, and he has had cerebral palsy since birth (as a breech baby, he was deprived of oxygen during delivery). But as you’ll read below, he has never let his disability get in his way. In July, Stew will travel to Colorado to begin a six-month tour with Up with People, and he agreed to talk with me this week about the trip and what it means to him. (And please check out our new Chocolate Mousse lip balm, made especially for Stew–all proceeds will go to his Up with People Fund!) 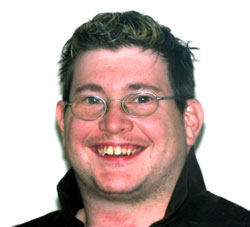 What was the reaction of your family and friends when they heard you were accepted to Up with People?
Well, the first person I told was Mom, and she gave me a huge hug, and expressed how proud of me she was. The family members that knew what Up with People was were super excited as well… in fact, one of my aunts is already planning a trip to the Philippines for one of the weeks I’m there. When I explain to my friends what things I might be doing, they’re really happy for me, and tell me how jealous they are of me. And then I have this cousin who is donating her time and talents and making me my own lip balm to sell at home and on her site… oh wait. That’s you…

What unique qualities do you have that you think will be assets to Up with People?
I think the most obvious asset that I will bring is my love of languages, my patience, and my ability to solve problems in a unique way. Also, largely due to my disability, I am awesome at adapting to different situations, which will be key as we travel to different cultures which have different ways of acting and diverse ideas of politeness and hospitality, etc. I already have had extensive experience relating with people from different cultures, starting from when my family hosted a Ukrainian foreign exchange student for a year, and in recent years, I have worked with a lot of students that come to Rockland every year to participate in an English (language) immersion.

Up with People uses “music as a way to communicate and inspire people.” I know that you sang tenor in high school—what other musical and theatrical experience do you bring to the group? 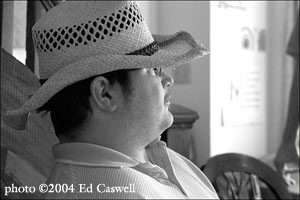 In college, I was in many plays, including Shakespeare when I played LeBeau in As You Like It, and a couple of musicals: I played Dr. Everett von Scott in The Rocky Horror Show…and I played Cardamon the wizard in a production of Once upon a Mattress, which was such a cool experience as well. For USM’s production of Cabaret, I ran the light board, (and I also served as an unofficial dialect coach, thanks to my role in Rocky which required me to have a German accent) and the following year I was the co-sound designer for their production of Steven Sonheim’s Company. All along the (Up with People) tour, the students have the opportunity to have internships in a wide variety of areas, including ones in technical theatre. It would be great if I could be a lighting or sound intern, or who knows… maybe even a vocal intern.

What are you looking forward to the most?
I am looking forward to so many things; I’m not sure if there is enough hard drive space to be able to fit what I’m looking forward to… I am really looking forward to being in the company of people who are as open-minded as I am and who have the same passion towards international understanding. The show that we will put on is an incredible show, and just to be on stage and performing in front of crowds of varying sizes is going to be incredible. Cast C ’07 performed in a high school gymnasium, and then the very next week, they performed at the Bangor Auditorium. This year Up with People is going to be touring Mexico (as Viva la Gente) for the first time since 2000. The Mexicans love Up with People, and I’ve heard they treat us like rock stars down there, so that will be exciting. Also we’ll be in Mexico for their National Independence Days, September 15-16, and I’m really excited to see what goes on during that. Then there is the whole Philippines in the winter thing… I could go on for days with this question.

What do you think will be your biggest challenge?
I think that definitely my biggest challenge is going to be mostly physical challenges, mostly with stairs. Stairs and I have always had a stormy relationship. And there may be a point along the trip where I’ll have to walk long distances. The other challenge may be the culture shock of it all. I’ve never spent a month in a foreign country, and I’ll be spending a month in two foreign countries, so that will definitely be strange, but it will allow me to grow and make me stronger in my abilities to adapt to different situations.

What have you been doing to prepare yourself?
I’ve been going to occupational therapy to try to think of all the obstacles I’ll come up against, and solutions to those problems, which has been really beneficial to me: I can now button my own shirt, tie a tie, and put socks on. Also I’ve been doing weight training both at the physical therapy department at the local hospital and at home. When the snow melts and it becomes more bearable to be outside for more than three minutes, I’m going to work on some stamina things. I want to be able to walk both ways across the 1,000-foot footbridge with minimal exhaustion by the time I head out to Denver.

Does Up with People frequently have participants with disabilities? Why do you think this is important?
First of all, thank you for asking me this question. If what I hear is correct, in the past twenty years, Up with People has only had three or four participants with disabilities. So it isn’t that frequent to have a student with a disability on the tour. In the recent past, there have been a couple of blind participants. In fact there is a man by the name of Eduardo Aguirre (or Edú for short) who handles the Alumni Development and also is the Mexico tour manager, since he is in fact Mexican. It’s great, because I have a contact there with someone who also uses a chair to get around who has toured with Up with People. Up with People is all about diversity and breaking down stereotypes, and as a person with a disability, I can bring my unique perspective to the group, and break down some of the major stereotypes out there about the disabled. I know that this country has come really far in terms of attitudes towards the disabled, but there are other countries that still have things to learn. Hopefully, by showing people that I don’t let my disability get in my way I can maybe change some attitudes and make people think about disabilities from a different perspective. It will also be interesting for me to ask the other participants about how their country views people with disabilities.

Mentoring is part of the Community Contribution encouraged by Up with People. It seems like you’ve already done some mentoring with the Life Skills class. Tell me a bit about that work. 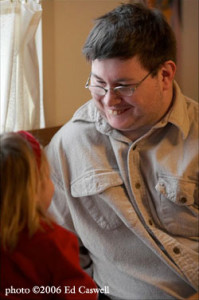 I was fortunate enough through my substitute teaching work to be placed in this classroom at the high school that is for kids with profound mental deficits who really can’t work beyond a Kindergarten level. The kids are all super, and even when I’m not subbing for them they always come up to me, give me a high five and ask me about my weekend, etc. Whenever one of the teachers is out sick, they always call the sub coordinator and tell them to “send in Stew.” It’s great for the kids, because a) a lot of them can relate to me because of my disability, and b) they can see how self-sufficient I am and that motivates them to do the same. Every time I go in there, I really don’t feel like I’m working because it’s such a good atmosphere in there, and everybody is focused on the success of each of the kids. It’s awesome.

I see from your itinerary that you’re heading to the Philippines… have you been brushing up on your Tagalog?! Do you think your proficiency with languages will be helpful?
Believe it or not, I still remember some Tagalog phrases that one of my Filipino friends taught me, and I took two years of Spanish in college, which is the equivalent of four years of high school Spanish. I think that my proficiency in languages is going to help me tremendously, and it is one of the things I’m looking forward to. It’s going to be great to have the chance to learn phrases in a whole bunch of different languages, and hopefully pick up a fourth or fifth language along the way!

What do you hope to take away from this six-month experience?
This is truly going to be a global experience, and I have never really gotten out of Maine. So, first and foremost, I want to expand my horizons on a personal, and professional level, as well as to prove to myself that I can do whatever I put my mind to. Also, I will be traveling with 109 other students from about 20-25 different countries all around the world. Being on a tour with that many people doing extraordinary things is a bonding experience on a really large scale. So, by December, I’ll be able to say that I have 109 brothers and sisters from all over the world. Finally, I want to take away the feeling that I have truly helped people less fortunate than I am and have shown them that there are people out there who are dedicated to changing the world and making it a better place for everyone.

Thank you, Stewart, for sharing so much about this upcoming experience! If you want to learn more about Stew and his fundraising efforts, please visit his blog at www.frenchgeek.net. And don’t forget to buy your Chocolate Mousse Lip Balm, available online and directly from Stew at his fundraising events.