Skip to content
Home/Just Thinking/Have your cake and your candles, too
Previous Next

Have your cake and your candles, too 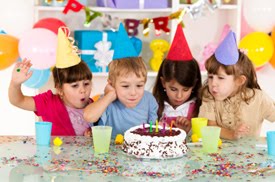 When my kids were little they really liked blowing out birthday candles. I know they weren’t alone because we’d have birthday parties and all of the little guests would lean in close to the flames as we sang the birthday song! I learned to  put a candle in each cupcake so everyone could participate (and the birthday kid had a chance to blow out at least a few of her own candles). I had “help” on my own birthday for years, which is probably why all of my wishes have come true. But while my own kids have long learned not to blow out other people’s candles, some kids never outgrow it.

You probably know the “kids” I’m talking about: whenever you’re really excited about a new idea or venture, or proud of an accomplishment and just dying to share, there they are. And with a big PUFF, there goes your flame.

I’ve often wondered why some people are like this. I figure some of them don’t have their own candles. Maybe someone blew out their candles and they’re just afraid to light new ones. Maybe you have more candles than they do, or bigger ones, or yours burn brighter. Maybe they just think it’s what they’re supposed to do. Whatever the reason, blowing out your candles is just as wrong now as it was when they were your party guests. What’s a person to do with these candle-blowers?

• Don’t invite them. You can’t always recognize them ahead of time, but after a few parties you’ll know who’s there for the cake and who extinguishes your candles every chance they get. That second kind doesn’t belong on your guest list. If you find them crashing every party anyway…

• Don’t be in a hurry to share. Even a flicker of an idea feels like a blaze when you’re excited about it. But sometimes things need to smolder, to be tended and protected while they grow. Keep the most important things close until you’re burning with them and then no one can blow them out. When you feel secure about what you have…

• Light their candles, too. While it’s tempting to keep them all to yourself forever, sometimes sharing a little spark will help someone start their own flame. When everyone has their own candles, they are less inclined to blow out yours.

Just like the candles on your cake, your ideas and passions are yours. You should be the one to decide to let them kindle or to blow them out. Don’t let anyone take that away from you.

What do you think?