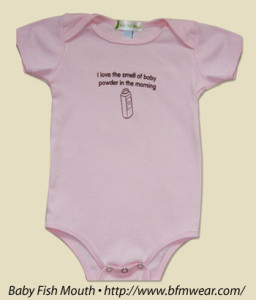 “Out of the mouths of babes,” the saying goes. Imagine if your favorite movie lines came out of the mouths of babes! That’s just what the mompreneurs of Baby Fish Mouth did, and displayed the resulting quotables on their line of clothing for babies. (The snapsuit pictured says, “I love the smell of baby powder in the morning.”)

These trendy tees and snapsuits just appeared in July’s Redbook, and were featured on The Big Idea with Donny Deutsch. If you’re struggling to think of an idea for a baby shower gift, check out their site. Right now they’re having an End-of-Summer sale, with short sleeve shirts and snapsuits at 20% off until September 26th.