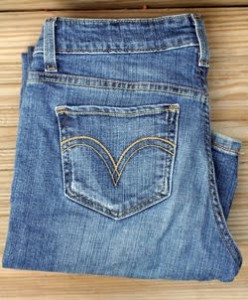 Today I packed away my “skinny” jeans. I love them so I’m kinda sad that they don’t fit anymore, but I’ll admit that I didn’t want to buy them in the first place. The years that I wore them taught me some interesting and surprising things about skinny—and fat—and how people feel about them.

For most of my life I’ve maintained an average weight, with occasional “overweight” years (according to the CDC’s definition). Several years ago I started having health problems, and while none were life-threatening, over time I lost weight. To deal with illnesses I had to make changes to my diet which led to even more weight loss. I bought jeans a size smaller, and smaller, and then a third size smaller; even my shoe size changed. My 20-something, SlimFast-slurping self would have been delighted with these changes, but I was sicker than I’ve ever been. I felt awful. It was even a little scary losing weight without knowing when it would stop.

What’s interesting is that at my sickest point, the compliments began. “You look great, have you lost some weight?” was a common question if I hadn’t seen someone in a while. I always said, “Thank you,” but felt strange accepting the compliment. I felt I hadn’t “earned” it. My weight loss was unintentional; not from being “good” and choosing the correct foods, or doing the work of exercising, but a simple side-effect of illness. Should I feel good about it? Should I explain what was happening? The whole situation was awkward.

Things got even more awkward when I started running to try to improve my health. I wanted to support my efforts by connecting online with other people in exercise programs, but found that almost everyone was trying to lose weight. Improvement to me meant gaining weight, or at least slowing my loss. How could I explain? I realized pretty quickly how I might be seen: comments about “skinny bitches” were common, so I gave up trying to participate. I remembered making similar comments years before when I had 10 (15? 25?) pounds to spare; it always made me feel better to say them, but it was pretty different being on the other side of them. I felt guilty about being thin, even though I hadn’t chosen it. I felt like I had to apologize to people when they said, “I wish I could have your willpower.” I couldn’t eat what I wanted to, when I wanted to, unless I wanted to end up in the hospital. To me, that isn’t willpower. I didn’t have a choice.

I have a 12-year-old daughter and I have been determined to spare her from body image baggage (if that’s even possible). We never used the word “fat” around our kids until they were old enough to understand how hurtful it can be. I didn’t talk about my weight, or hers. When she was 8 some of her 8-year-old friends were already talking about dieting with their moms. We just kept talking about everyday foods and special occasion foods, about exercising for fun and to stay healthy. We tried not to focus on what people looked like or what they weighed.

And that’s why I packed up the jeans. As I’ve started feeling better and have gained back some weight (yes!), my clothes just don’t fit. There’s nothing more irritating than too-tight clothing (especially jeans), and I was starting to complain about it. “Fussing” was giving it too much attention, so I put them away. While I always imagined it would be good to be thin, the experience was not what I expected. I felt guilty and isolated in addition to feeling sick. Being skinny, I’ve learned, doesn’t necessarily mean being healthy. And being healthy is exactly what I want for myself AND my daughter.

I know that this is a complicated issue and that my experience is only one small part of a much bigger picture. I’d love to know what you think. How do you feel about weight and body image? Do you feel that you’re healthy AND that you have a healthy view of yourself? If you’re a parent, how have you helped your kids to feel good about themselves no matter what shape they are?