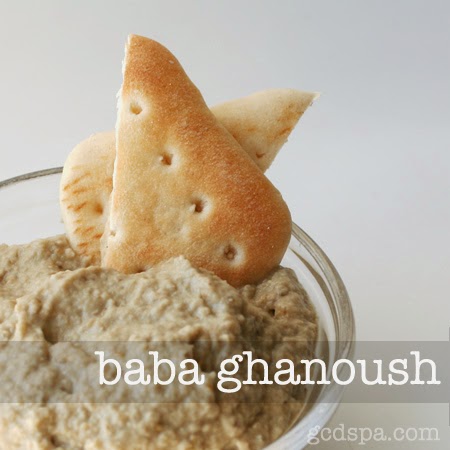 I’ve always wished I could just call this plant an aubergine, even though I’m not French (or British). I’ve never grown the white variety and rarely buy them, so I’ve never quite understood the egg resemblance. Whatever you call it, though, eggplant makes a scrumptious August meal.

We’ve been picking up veggies from a local farm every week since June and in the past month we’ve had a couple of types of eggplant. I’ve broiled them, fried them, and roasted them. We’ve eaten them on pasta, in sandwiches, in salads and in sauces. I realized that the only thing we hadn’t tried was a dip, and a little reading brought me to baba ghanoush. This Middle Eastern dish contains the one ingredient I personally require in a dip/spread: garlic. Here’s how you can make your own:

juice of 1 large lemon (approximately 1/4 cup)
1/3 cup tahini
2 cloves garlic, minced (I might even live dangerously and use 3 next time—wheeee!)
1 1/2 Tbsp olive oil
salt and pepper to taste 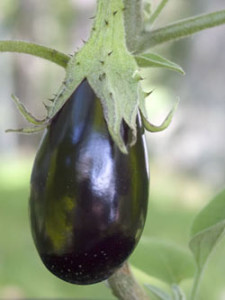 The first step is to bake the whole eggplant in the oven—don’t slice or peel it, just cut off the top and poke it all over with a fork. Place the eggplant on a greased pan in 400° oven for 30 to 40 minutes, turning periodically. The eggplant will be very soft at the end. Remove from the oven and cool off eggplant in ice water, then remove and discard the peel and place the rest of the eggplant in a blender with the lemon juice, tahini, and minced garlic. Blend until smooth, then add olive oil and salt and pepper to taste. We let this sit overnight to allow the flavors to blend (and the garlic to get really potent!), then ate with flat breads and baked tortillas. 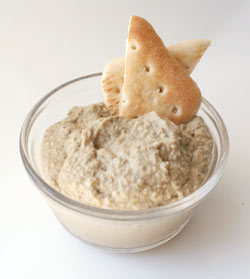 Oh, tortillas—have you ever used a flour tortilla this way? It’s awesome with hummus, too. Use a pizza cutter to cut a tortilla into strips, then bake at 250° for about 20 minutes. Flip them over halfway through the cooking time. You’re basically turning these into crackers, so make sure they’re crispy at the end. Try the spinach or tomato varieties of tortillas to mix it up. Yum-o.

I think this might be really good with cumin or olives, too. It’s a recipe that I may keep experimenting with. What do you think? Have you ever eaten baba ghanoush? Don’t you just like saying it? I know I do! Please share your comments!