We had the most spectacularly beautiful October days last weekend: temperatures in the 70s and 80s, sunny skies and warm breezes. It really felt like we were back in August again—except for the gorgeous foliage and the sweetly ripening apples.

We spent Sunday afternoon at Ricker Hill Orchards in Turner, Maine, picking about 65 pounds of apples. I can’t tell you how many bushels that is, but it resulted in a dozen bags of sliced apples in the freezer, a couple of quarts of applesauce, a handful of dried apples, and a pie.

If you think I could get away without making a pie, you don’t know my husband. He happily peeled, cored, and sliced apples for hours, dreaming (I’m sure) about the pies I’d make this winter. I have to agree with him: there’s no better way to enjoy an apple (unless it’s right off the tree). Here’s what you need: 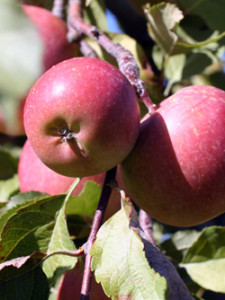 Preheat the oven to 425° and get out your pie plate. In a medium bowl, combine the white and whole wheat flours and the salt by stirring with a fork. Add the shortening (I stir in vegetable oil, tossing with the fork to make it resemble coarse crumbs) then stir in water until you can combine the dough in a ball. You don’t want to overwork pie crust, so there’s no kneading at all. I find it easiest to roll out the crust between two pieces of wax paper, then gently peel back the top layer and flip the crust over to place into the pan. Then you can peel back the other layer of paper (which is now on top) and pat the crust into the pan. There will be extra dough hanging over the edge of the pan, but we’ll trim that later.

Prepare the filling by combining the sugar, salt, spices, and flour, then adding this combination to the apple slices and stirring to coat. Pour the sugared apples into the prepared crust, then dot the top of the filling with butter (if desired).

Roll out your second pie crust, removing the top layer of wax paper as before. If you want to cut out a decorative top, use your cutters or a knife now, leaving the bottom wax paper on so the crust is easier to move. Once it’s finished, flip the crust again so the wax paper is on top and center the crust over your filling. 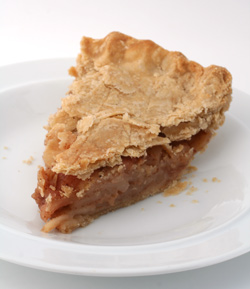 Now you’ll need to trim and finish the edges of your pie. (If you’ve done this before, you won’t need to read this next part! Just finish your crust as you always do and pop it in the oven!)

I take a knife and trim the crust so there’s about 3/4 to 1 inch of crust beyond the edge of the pan. Don’t worry if there are some open spots along the edge: you can take a bit of the crust you trim off and pat it into place so the crust covers the filling all the way around. Once the edges are trimmed, I hold the two layers of crust together and fold them under so they sit just beyond the rim of the pan. I fold all the way around, then I go back around pinching the dough with my thumbs and fingers to make ridges along the edge. You could also use a fork or a more decorative pattern.

If you didn’t cut a pattern on the top of the crust, you should poke a few holes in the top before baking. You can also use the extra scraps of dough to make decorative leaves or other shapes and set them on the top crust before baking.

Bake at 425° for 10 minutes, then reduce heat to 350° and bake for another 30 to 40 minutes, until the crust is browned and the filling is bubbling. Allow to cool, or serve warm with ice cream.